Due to an error with a wrongly announced 1st place, all Open places are as restated.

Many thanks to the early bird helpers who helped set up and with registration, especially Trevor and Anthea White, Hannah and Boris, and James Ayling.

Thanks to all the handlers who helped make it a great day and for being so sporting.

Apologies for the arithmetic errors. New certificates will be sent on.

Well done everybody, and thanks again to Tony Russell (the host), judges, dummy throwers, working sub-committee and other helpers, and the competitors who all made the day very enjoyable.

Gundog Working Tests are competitions which, by artificially simulating shooting day conditions, seek to assess, without game being shot, the working abilities of the various breeds of Gundog.

6 x1st in Puppy, 2 x2nd in Puppy, 1x3rd Puppy, 1 x excellent in natural ability test, 1x3rd Novice, 1x2nd Novice, Highest placed and Highest scoring Vizsla at the Hungarian Vizsla Club WT, plus she was given v.good and excellent for her conformation. 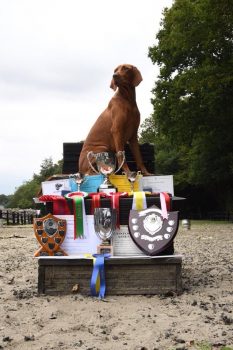 OPEN. Open to all dogs of a specified breed or breeds, although preference may be given to dogs which have gained a place or certificate of merit at a Field Trial, been placed First, Second or Third in an Open GWT, or won a Novice GWT.

NOVICE. Confined to dogs which have not gained a place or certificate of merit at a Field Trial, been placed First, Second or Third in an Open GWT or First in a Novice GWT held in accordance with Kennel Club Rules and Field Trial Regulations.

PUPPY. Confined to dogs of specific breed or breeds less than eighteen months of age on the date of the test.

UNCLASSIFIED. Open to all dogs of a specified breed or breeds, but may be restricted by conditions as determined by the society. To include Water and Team Tests. A Water Test can include dogs of any sub-group competing together. However, if dogs of more than one sub-group are competing as a Team, each sub-group will compete and be judged in accordance with the Kennel Club Gundog working Test Regulations relating to that group.

It was a really super day organised by Derek Whitfield and Margo Robertson and thanks to all their hard work it went very smoothly.

Competitors were welcomed with complimentary coffee and biscuits after getting their numbers and then Derek and Margo introduced the Judges Pam Terry (Puppy), John Parnham, and Lisa Baker (Novice Dog/Novice Handler), Fiona Gerhard, Rod Johnson and Sue Hender (Novice) Lisa Brown and Allan Hender (Open) and Mark Jones (Water) and gave instructions for the day.

We were blessed with sunshine and the Ashdown Forest became a magical place with sun filtering through the trees as the day warmed up. It’s numerous grassy tracks and woodland were superb for the retrieves and there were 3 water locations used. However, it was easy to get lost if you couldn’t keep up with your judge, who was perhaps more familiar with the forest, resulting in some competitors having to be retrieved by Margo and Derek!

The number of judges on the day, along with the choice of water tests, made for a prompt finish although there was a small delay as there were 2 puppies with identical scores in 2nd place so the judge offered these competitors the chance to do another water retrieve to decide the final placings which was hastily carried out by the handlers and their 2 lovely puppies to the judge’s satisfaction so she was able to make her decision.

Helpers are critical to the smooth running of a Gundog Working Test and we are very grateful to our helpers on the day who booked everyone in, threw dummies, stewarded for the judges, helped with the Raffle, set-up and breakdown of the base, scorers: They were Sue Millson, Gill Parrott, Danny Thorogood, Gary Krolikowski, Nicola Chipper, Susan Northwood, Jim Novis, Lloyd Upton, Aaron Busby our photographer for the day and his Mum Caroline Busby and Jacqui More who provided the delicious food for Judges, Helpers and Cakes for all.

Everyone gathered chatting in the afternoon sunshine whilst the final scores were added and Derek then announced the placings and awards were presented by Sue Millson and the judges of the Classes and the judges each gave a summing up of their tests. Class Winners were presented with cups and awards were given to 5th place, and rosettes and cups for the highest placed Vizslas were given in each class which were so appreciated by those that won them.

It was a really nice atmosphere – everyone was friendly and accommodating and Derek and Margo were overseeing everything at base throughout the day to make it into a really well run event.

At the end of the prize giving Derek gave a very moving tribute to his wife Simone and all the work that she does in the background to make the working tests into such an enjoyable day for everyone.

Hungarian Vizsla Club really appreciated the members of the GSP Club, Sussex Branch, who gave up their Saturday to come to Ashdown Forest and help Margo set up the tests.

Photos of the day 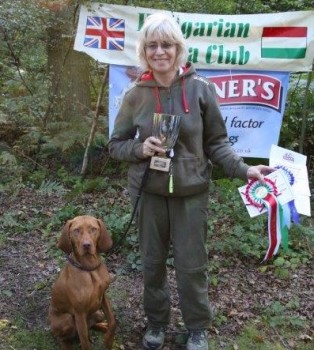 If you are new to working your dog, or fancy trying your hand at training for gundog work, then you may find Margo’s Blog(on these pages) an interesting and useful read. Our Secretary is currently training her young bitch, Tara, having had no prior experience of training a gundog for field work. She will be writing regular updates as training progresses, with all the trials and tribulations she encounters along the way.