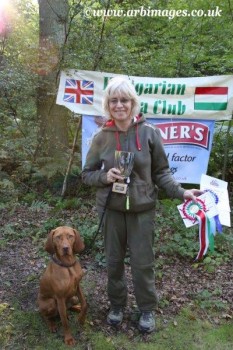 Our next shows are:

Schedules are circulated to all Club members and are also available from the Show Secretary, or can be downloaded from the website when available.

Our Open Shows are sponsored by Royal Canin

The Club held a very successful GWT on 25th May 2015.The results are here.

If you are new to working your dog, or fancy trying your hand at training for gundog work, then you may find Margo’s Blog an interesting and useful read. Our Secretary is currently training her young bitch, Tara, having had no prior experience of training a gundog for field work. She will be writing regular updates as training progresses, with all the trials and tribulations she encounters along the way.

To see more photos of the working test click here

21 people attended the training day at Moor Cops Nature Reserve, West Berkshire. There were three trainers Allan & Sue Hender and Andy Parker. Owners and vizslas alike benefited hugely from their experienced advice and a great day was had by all – read more Aaron Busby was there as our photographer – see his images

The Club was proud to be associated with an extremely successful vizsla health seminar – at Fitzpatrick Referrals – home of the Supervet !The event was attended by 60 dedicated vizsla owners and breeders, HVC committee members, representatives of the Charity and great interest too from veterinary professionals. Here is the Fitzpatrick  news item The topics covered were (slideshows) –  Vizsla Inflammatory Polymyopathy (VIP), First Aid, Lumbosacral Disease, Epilepsy/Genetics

For full details of this special day click here

The Club held a very successful fun rally – the result of many many months of planning and hard work by the HVC committee and other helpers too on the day. The activities included a fun dog show, agility and talks on behaviour, training and showing. Plenty of side stalls too. It was really gratifying to see that all the people who came along enjoyed themselves with their gorgeous dogs. We’ve been asked by many when the next rally will be, all I can say is watch this space. Click here to see the full account of the day.

We had a great training day 27 April with Allan Hender.

26 people attended with dogs of various ability. The weather was kind to us and hopefully everyone enjoyed the day.

We had hunting and pointing live caged Quail , blood tracking, various retrieves and water retrieves and lots of advice from very experienced trainers.

The HVC held a water training day with Allan Hender in West Berkshire, the weather was kind to us and it did not rain until the very end of the training. Unfortunately the original water training area was not available to us and we therefore trained at the West Berkshire Gundog Club training ground which has a fast flowing river and to ensure that there was not too much hanging around we also did some general training. Click here for more information about a great day

The day ended with some exhausted dogs (and handlers) and hopefully everyone gained something from the day.

Thank you all who took part and thank you for your support.

at the Drummond Estate, Enderby, Leicestershire by kind permission of
Mr Fred Drummond and his gamekeeper Brian Griffiths

The weather had been kind to us – no rain, some sunshine and a light breeze ideal for hunting. We had 9 dogs attending (5 Vizslas, 3 Weimaraners, 1 Cocker Spaniel) and started the day at 10am with some basic obedience training. We worked our way up until all dogs present where shot over.

We also had some spectators and a family attending who are waiting for their Vizsla puppy to be born.

Everybody enjoyed their day and came away feeling a lot more positive about what they can achieve with their dogs. They were all presented with a Certificate, Rosette and HVC trolley token keyring.

Unfortunately we were not able to hold a raffle on the day but I wanted to give a special mention to Susan Northwood who very kindly sent a cheque for £15.00 towards raffle prizes. Susan attended the first training days we held in 2011. She learnt so much on these days and has entered many working tests with her Hookside Gabor (Rudi) since.

The Club held a Working Test on Sunday 30th September on land to the west of the B2188, Ashdown Forest, East Sussex. 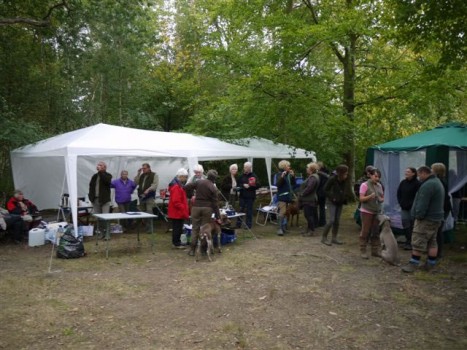 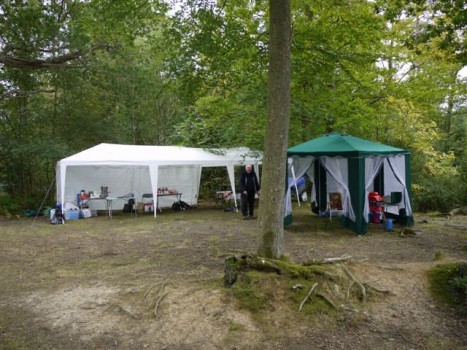 Following on from the successful training days held in March and April 2011, the Draycott family (owners of the Tooley Park shoot) offered the ground for a shot over day towards the end of the season. This took place on 21st January and was attended by 6 novice dogs and handlers. I was generously assisted by Penny Simpson and the guns on the day were Peter & Andrew Draycott, Mark Hill who owns the adjoining farm who also made ground available to us on the day and Nick Hart who handles the financial side of the shoot.

We began the day with a walk through a cover crop of mustard; each dog was run individually to assess obedience and steadiness in an area where we did not expect to find too many birds. We then took a long walk via hedgerows and ditches to one of the larger spinnies where all the dogs were run as a beating line, several birds were shot and retrieved. After lunch we boarded the shoot bus to Mark Hill’s farm and worked the dogs through maize and a spinney. At the end of the day all had at least 2 retrieves ad everyone had been given an insight into working their dogs on live game under gun fire and hopefully now have the confidence to join a shoot local to themselves and enjoy and fulfil their dog’s abilities.

I am also grateful for the assistance on the day of Jim Novis and Simone who brought 2 experienced Vizsla bitches in case any wounded birds proved too difficult for the novices, in the event they were not really needed.

The HVC recently held 2 training days for novice handlers as an introduction into working their Vizslas on a shoot, working test or field trial. 12 Vizslas and their handlers attended either one or both days and hopefully all have learnt something and more importantly enjoyed the days.

Both days were held on Tooley Park Shoot in Leicestershire and a special thanks should be given to the owners, the Draycott family, for allowing us free range over the shoot and the use of the shoot’s lunch hut for refreshments.

The weather on both days has been extremely kind to us, especially on the 2nd day when we had glorious sunshine all day.

We started both days with a demonstration by Geoff Thompson and his 10 months old GSP, Max. All those present were astounded by his ability to stop at distance on the whistle and his prowess on retrieving both seen and blind dummies.

After this we were split into 3 groups with Penny teaching hunting, Geoff teaching retrieving and Derek teaching basic obedience and also explaining the working of the shoot and how we beat with our dogs through woodland. Some handlers were treated to a visit to one of the laying pens holding some of the more exotic pheasants.

The trainers felt that all of the dogs had some degree of ability and felt they could all progress and be a credit to their owners so hopefully this will just be a start to their working careers.

Also thanks to Queenie Whitfield for providing some delicious cup cakes.

A total of £435.00 has been raised for the Polymyositis Fund.