The concept of canine agility began in the UK in 1977 and quickly spread throughout the world. It is currently one of Britain’s fastest growing dog sports with training classes and competitions being held across the country.

The aims of dog agility are very similar to show jumping – the dogs (with the help of their handler’s voice, movement and hand/body signals) have to complete a course of between 16 and 20 obstacles in the right numerical order, without any faults and in the fastest possible time. The best words the agility team can hear on completing a course are “clear round” meaning no faults! 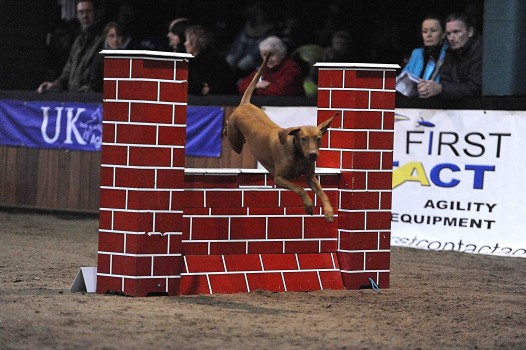 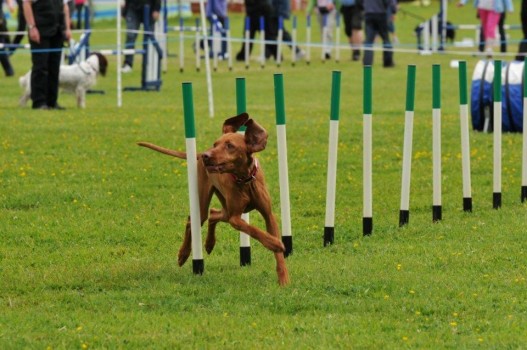 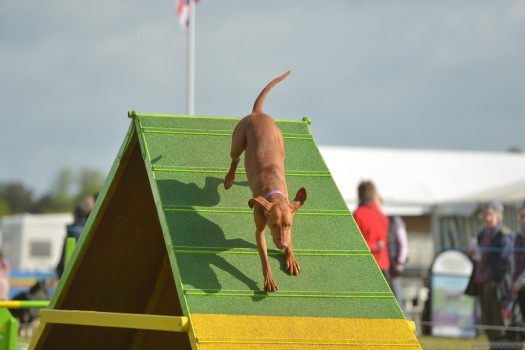 At training classes the dogs often learn with the help of toys or treats…but…when it comes to competitions these incentives are not allowed, nor is the handler allowed to touch the dog during the running of the competition course!

But…you don’t have to compete…there are many owners who are happy to attend weekly classes for the overall training that it offers, socialisation (of dog and human), bond building with your four-legged charge and helping to keep both owners and dogs fit. Even better – agility training exercises the brain too…for both of you!

So, hopefully, you can see that dog agility is a fun sport that helps to build a true partnership between dog and human.

The following is essential before beginning agility training:

In June 2012 the UK Hungarian Vizsla Agility League (UKHVAL) was formed so that those who love to do agility with their ginger boys and girls could get recognition without competing against other breeds. We decided to set up a Facebook group for the following reasons:

The league will run from 1st January to 31st December each year and is based on a points system (see below). New members that join later in the year will have their points backdated.

The league is run on an honesty basis.

The administrators for the league are Rachel Shergold, Sue Roberton, Juliet Bailiff and Lindsay Thomason

At present there is no annual fee to join this league. We seek sponsorship for rosettes and end of year awards.

When registering we ask that the following information be provided so that we have both the handler/owner and the dog(s) full details:

Agility was first introduced to the UK at Crufts 1978 and the structure of the competition has not changed very much over the years. It’s a comparatively new form of dog competition, where the animal’s fitness and the handler’s ability to train and direct the dog over and through certain obstacles are tested.

It is fast, furious and a great favourite with competitors and spectators alike. Your dog does not have to be a pedigree dog to take part, but it must be registered with the Kennel Club on either the Breed Register or the Activity Register.

If you decide that Agility is a suitable activity for you and your dog, your next step is to receive some expert training. Whatever competition you choose, your dog will be a happier pet for being trained.

Once you start competing in agility it can become addictive. Shows are held all over the country for each Grade and height, giving you the opportunity to compete regularly and meet likeminded people.
As you enter different shows you might find yourself bumping into the same competitors and making good friends with the people who take part in this sociable hobby.

The formal requirements for competing in a Kennel Club licensed Agility show are quite simple:

Your dog must be registered with the Kennel Club, either on the Breed Register or on the Activity Register.

Dogs can only enter Agility shows when they are 18 months of age or over and have been officially measured and placed in the correct height category.
You will need to have an Agility Record Book (available from the Kennel Club online shop) in which to record your dog’s height category and all your competition wins and clear rounds.

Training
Preparing your dog to be able to compete successfully will take a little longer than the formal requirements. It is essential that your dog is fully socialised and that you have effective control at all times, especially as your dog will be competing off-lead. For safety’s sake it is recommended that dogs do not start training on equipment until they are at least a year old.

Plenty of regular practice is essential preparation for Agility competitions, but supervised training at an Agility class is just as important. There are a number of training clubs across the country. 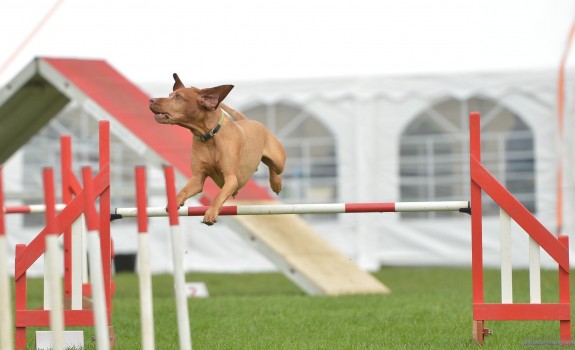